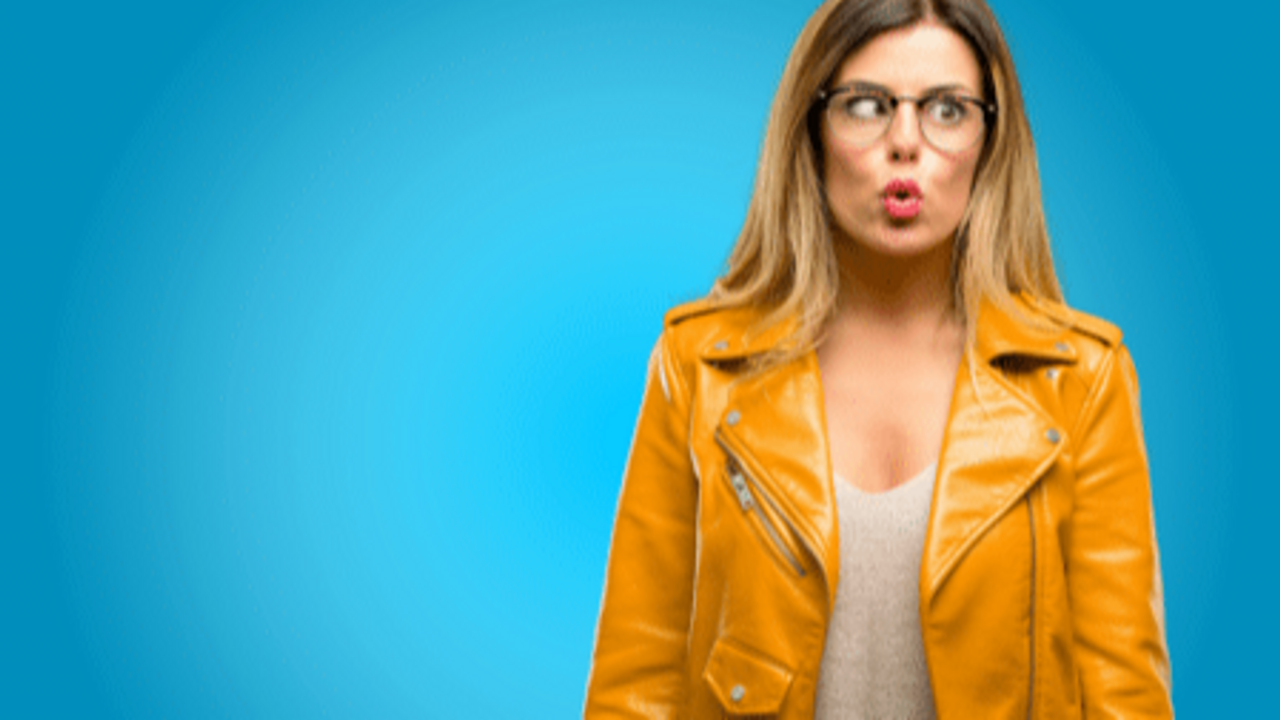 I never expected to sit down at my desk on a Monday morning and find my inbox flooded with messages from strangers, asking me if I had seen what Dr. Sandra Lee (aka: celebrity dermatologist “Dr. Pimple Popper”) had said “about me” on Twitter.

One person helpfully sent me a screenshot of the post that launched a controversy: 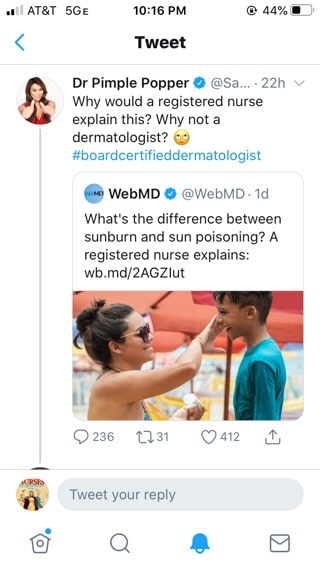 Perhaps it was the eyeroll emoji that set Nurse Twitter off, or maybe it was the overall tone of the post. Whatever the source of ignition, Dr. Lee’s post (since deleted, along with her subsequent apology post) went up like an unwelcome Roman candle within the nursing community.

The post refers to a blog post I wrote for WebMD, titled What’s the Difference Between Sunburn and Sun Poisoning?

As I gulped coffee and tried to shake the cobwebs out of my sleepy head, I focused on grasping what was going on here. How on earth could a benign little article like this fire up such controversy? What’s controversial about sunburn?

Of all the thousands of health articles I’ve written over the course of my career, this is not the one I would have suspected might go viral. I laughed at the very thought of it.

Of course, it’s not the subject matter at issue here. Dr. Lee’s post appeared to question the “appropriateness” of having a Registered Nurse author a skin-related health article instead of having a physician write it. And this questioning of a nurse’s…I dunno – knowledge? credentials? expertise? authority? – to write such a piece did not sit well with the millions of nurses on Twitter.

I feel there’s a real lesson in this for all nurses who write – especially those just starting out. So please indulge my thoughts on this.

If you plan to go into freelance writing as a nurse, the first thing you should know is that publishing of any kind invites criticism. You will first be edited (criticized) by your editor or client. Next, you may be criticized by readers. You cannot escape this unless you stick to publishing privately.

But if you want to get paid to write – which involves publishing your work publicly – then you must expose your writing to criticism from various camps. That’s how this works.

Strategies for Coping with Criticism of Your Work

You have a choice in how you respond to such criticism.

I highly recommend the second approach. You’ll be much happier in your career if you learn to distance yourself, emotionally, from criticism of your writing.

Perhaps you’re thinking, “That’s easier said than done.” I concur. It takes a lot of experience to learn to grow a thick skin and shake off criticism of your work. And that experience, unfortunately, involves dealing with feelings of upset.

Let me share a few of the ways I deal with criticism of my work – and how I coped specifically with the maelstrom of controversy after the Dr. Lee kerfuffle:

1. I don’t read the comments

I’ve often joked that the first rule of digital journalism is “Don’t read the comments.” But it’s not really a joke. Personally, I never read the comments (if any) left by readers of articles I’ve published. Something about the anonymous nature of online commenting seems to bring out people’s nasty, trollish behavior. Why would I voluntarily expose myself to that?

In fact, I barely read any of the comments appended to Dr. Lee’s post. Some people told me a gaggle of dermatologists posted in defense of Dr. Lee and took issue with some of the content of my article, but I wouldn’t know about that – because I didn’t seek out any comments like that.

2. I look at editing as a learning experience

I’ve said this a thousand times to aspiring nurse-writers: Everyone gets edited.

All professional writers get edited. It’s not because your work is “bad.” Editors and clients will edit your work to:

Editing does not mean you’re a bad writer. If you can learn to embrace the editing process as a way to learn new skills to take forward in your writing career, then you’ll be taking a constructive approach that will serve you well.

Earlier in my career, I used to get very rankled by edit requests. I even would lash out at editors over it occasionally.

But then one day I realized that not only was this unprofessional, but this behavior actually made me feel…terrible. Behaving like this, having a bad attitude, permeated my mood – sometimes for days.

So I tried a different approach: graciousness.

When I approached edit requests from a position of graciousness – thanking the editor for the opportunity to strengthen the piece, asking non-defensive questions to clarify points, adopting a collaborative spirit with a goal to make the article the best it could possibly be – then I discovered my mood felt very light. I felt…happy. I felt like a better person, in general.

I think you can never go wrong by adopting a little humility in your editorial interactions. And if you’re dealing with criticism from the public, try a dose of graciousness there, too. Try giving people the benefit of the doubt by assuming their goal is not to personally attack you but to honestly understand you or your writing better.

And if you do give someone – an editor, a reader – the benefit of the doubt and they personally attack you, anyway, then just move along. Ignore them. Trolls and bullies can’t stand being ignored.

If “don’t read the comments” is the first rule of digital publishing, surely the second must be “don’t feed the trolls.” Try to resist responding to people whose genuine goal is to hurt you.

5. I keep a sense of proportion

Look, as nurses we’ve been exposed (sometimes daily, in the current climate with COVID-19) to actual life and death. Does some reader criticizing your work on Twitter really rise to the same level of concern and upset as a patient (or person you love) dying? Does it?

I can tell you, for me it does not. I do not allow feedback or criticism of my work to rise to that level. I could not stay sane if I did.

In the current controversy, I stepped back for a moment to remind myself of this. I’ve lost my husband suddenly and unexpectedly, and now I’m slowly losing my mother to dementia, and, believe me, reminding myself of these facts helps me remember that the random comments of a dermatologist – celebrity or not – about something I wrote do not deserve a high-level emotional response from me.

Always try to keep a sense of proportion about where your work ranks, emotionally, in relation to other aspects of your life. Don’t give it the top spot.

Be Prepared for Virality When You Least Expect It

I wrote this post specifically to help you prepare for unexpected virality and criticism. I certainly lament the fact I had absolutely no game plan for dealing with an event like the one that has continued to build momentum over the past few days. Maybe in the coming weeks I’ll perform a postmortem on this situation and offer you some tips for what to do if something you write unexpectedly goes viral.

In the meantime, I urge you to simply focus on learning to accept criticism of your work whenever it comes your way. Evaluate the source, determine if the criticism can help you grow as a writer, and then act on it (or don’t).

But whatever you do, please don’t take criticism personally. It’s almost never about the writer, only the writing. Remember that.

Don’t forget to subscribe to my free weekly newsletter for more great articles! 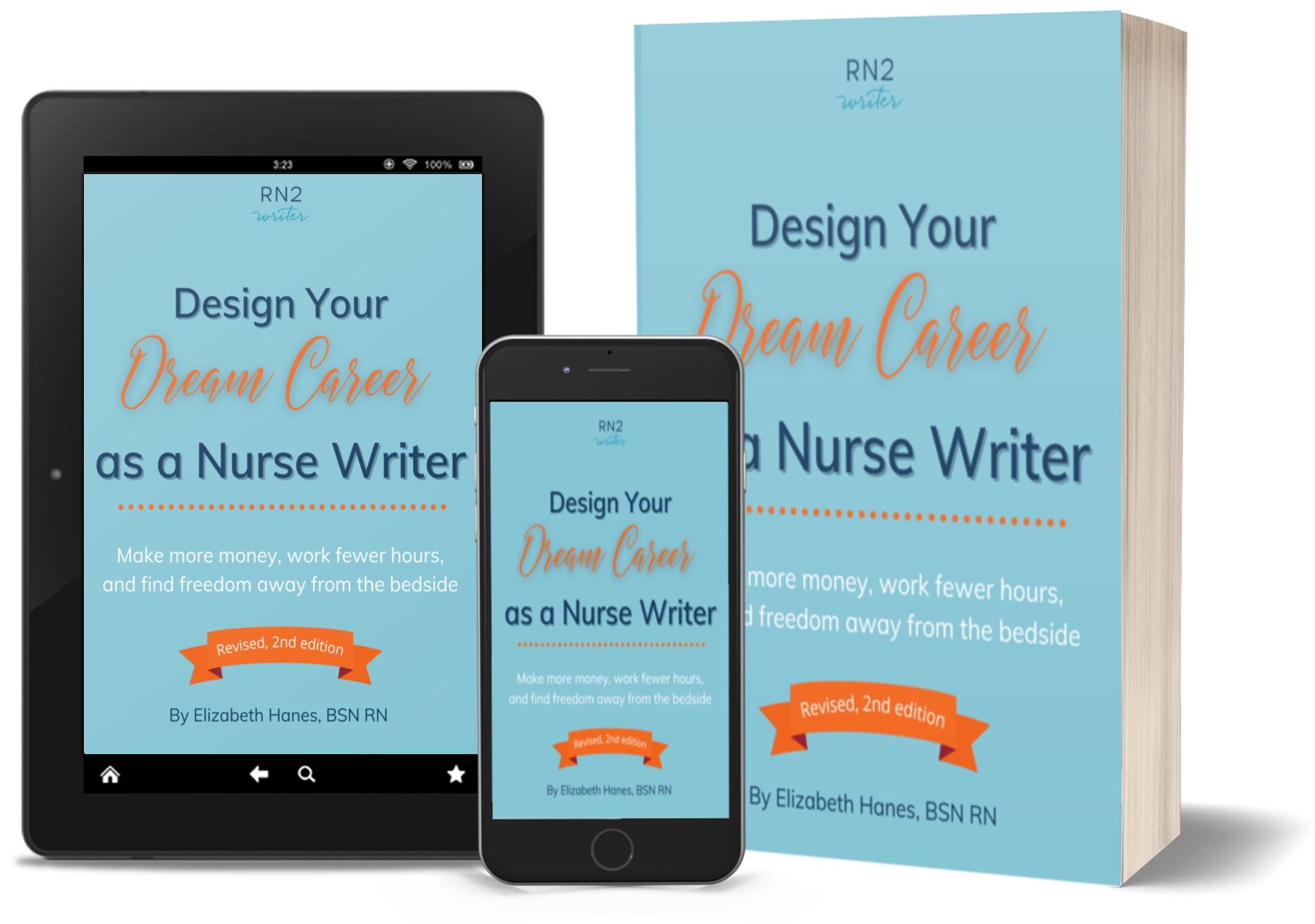 You deserve to thrive as a nurse, to be respected as a true expert, to be paid what you’re worth.

Get the ebook now to learn the exact steps to take to get started as professional writer: 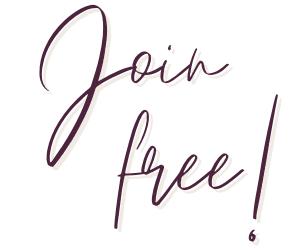 12 Things to Do in December to Jumpstart Your Writing Career in 2022
Bookmark This: Your New Must-Read Blog Site is Coming
Workweek: New B2B Media Model Launches – Relevant for Nurse Writers? 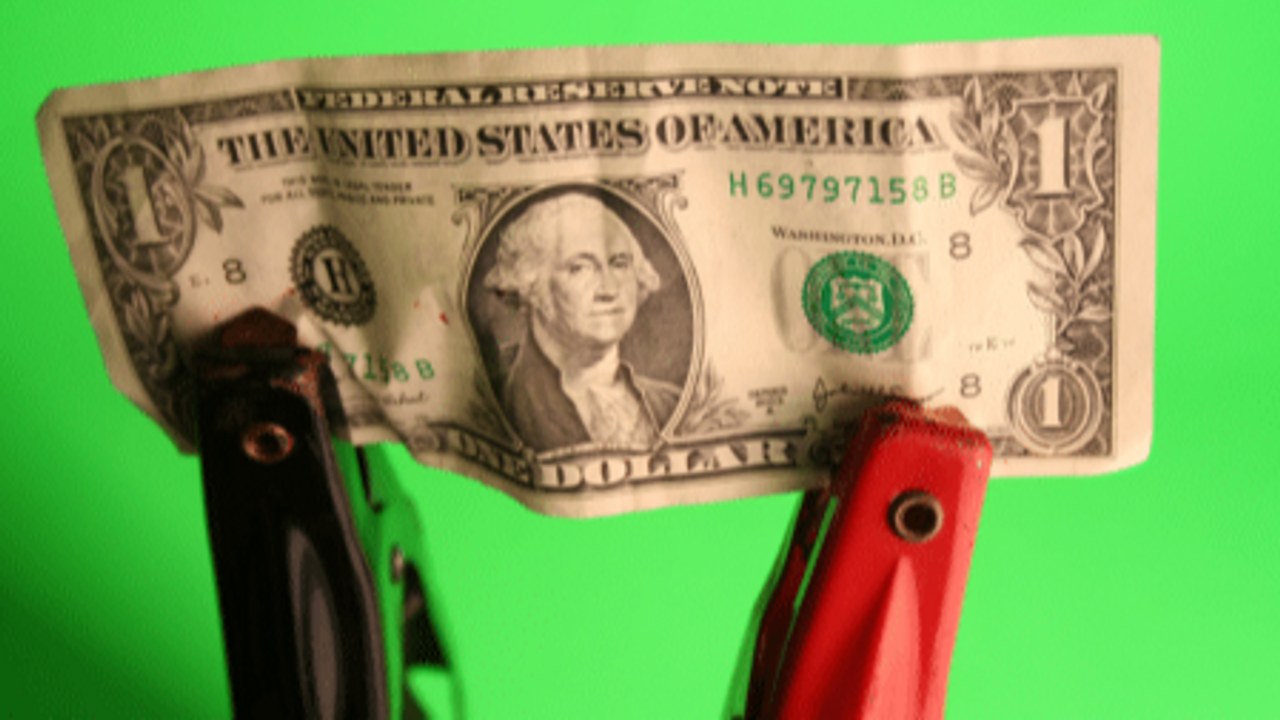 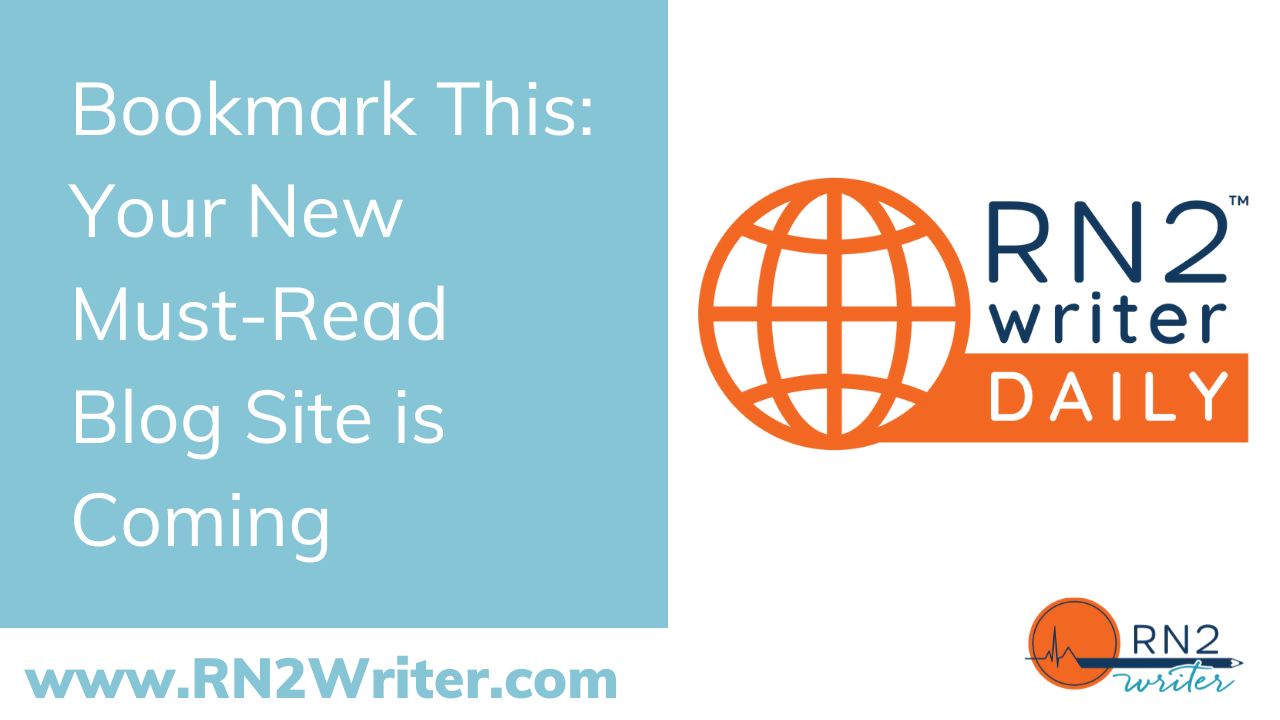 Bookmark This: Your New Must-Read Blog Site is Coming 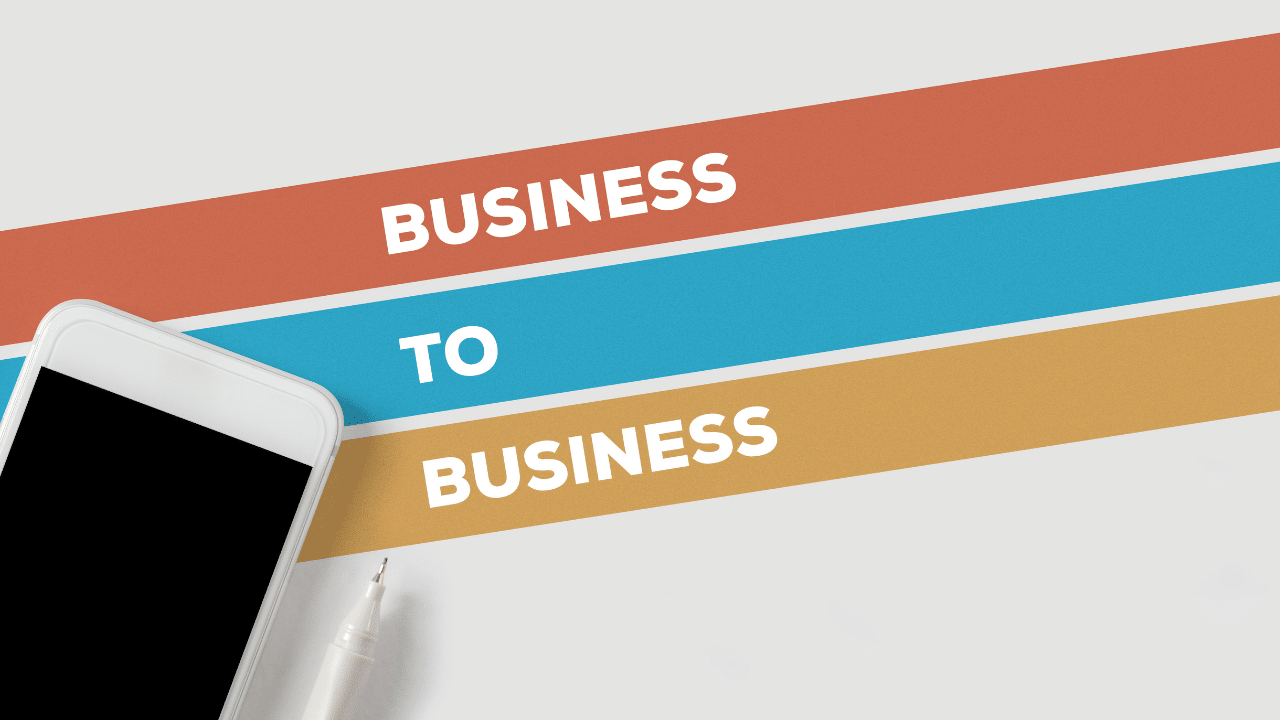 read more on the blog

We offer training in the best remote, work-from-home nursing job - freelance health writing. If you’re looking for the perfect side hustle for nurses or a full-time nurse business, you can rely on RN2writer to deliver educational courses, coaching, and community for nurses of all degrees, licensures, and backgrounds across the U.S., Canada, and beyond. We welcome all nurses: RN, LPN, NP, APRN, CRNA, FNP, CNM, etc. We also serve other healthcare clinicians and professionals: CNA, MD, PA, LCSW, PharmD, radiology tech, CEO, CNO, CMO, and anyone else with a background in healthcare. Welcome!